Jordan Daily – His Majesty King Abdullah on Monday met with the Senate’s president and committee heads at Al Husseiniya Palace and stressed that Jordan is moving forward with political modernisation without hesitation, as the upcoming stage requires the hard work and dedication of all.

King Abdullah said there are parties that want the modernisation process to fail, but he expressed confidence in success, with the strong will of Jordanians.

His Majesty called for enhancing collective action, based on genuine partnership, stressing the need to accept differences in opinion and overcome personal disagreements in service of national interests.

The meeting covered domestic concerns, with the King noting that unemployment requires bold national decisions and continuous cooperation between the public and the private sectors.

His Majesty pointed to water scarcity as the biggest threat facing the region in the upcoming decade.

The meeting also addressed regional developments, foremost of which is the Palestinian cause.

For his part, Senate President Faisal Fayez said Jordan is moving resolutely ahead, despite all challenges.

The Senate president stressed that proceeding with political modernisation requires cooperation among all Jordanians, continuous constructive dialogue, rebuilding trust between citizens and officials, and countering populist attempts to incite bigotry.

Senate committee heads spoke about several local and regional concerns, calling for adopting strategic, sustainable plans that continue across governments, in order to guarantee progress in implementation, rather than have every new government start over.

They reaffirmed Jordan’s central role in defending Arab causes, foremost of which is the Palestinian cause.

Royal Hashemite Court Chief Yousef Issawi and Director of the Office of His Majesty Jafar Hassan attended the meeting. 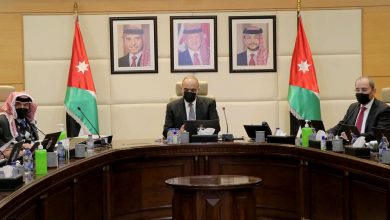